This year marks the 37th year since the first observance. It is also the 28th anniversary of the Westray Mine disaster that saw the lives of 26 miners taken on March 9th, 1992 as a direct result of the workplace. The disaster also brought forward changes to Canada’s Criminal Code in 2004 making it possible to prosecute employers for negligence leading to workplace death and/or injury.

Across Canada close to one thousand workers die each year and many more are injured as a direct result of the workplace.

The annual ceremony attended by approximately 500 people including injured workers, coworkers, family members, elected officials and others at Vincent Massey Park in Ottawa will be instead taking place as a virtual ceremony. The approximate 40 minute Zoom webinar ceremony commences at 12:30pm on April 28, 2020 and will feature speakers and a minute of silence for all those workers impacted as a result of the workplace.

“We need to continue to mourn for the dead and to fight for the living. This includes ensuring that all workers are provided with PPE and the proper training to use it safely. Our role as labour and indeed that of our elected officials, employers and the broader community is to ensure we strengthen health and safety for all workers. COVID-19 did not create this need rather it reinforced the necessity”, said Sean McKenny, president of the Ottawa and District Labour Council.

The Ottawa and District Labour Council (ODLC) has been the voice of working people in the Ottawa area since 1872. The ODLC currently represents 92 local unions with a combined membership of 50,000 working men and women and is the largest democratic and popular organization in the Ottawa area. 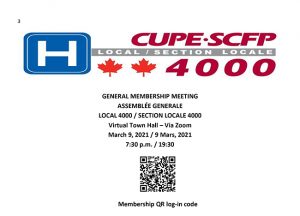