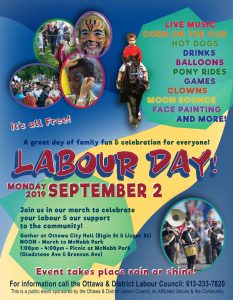 In light of the implementation of the EPIC system, CUPE Local 4000 is concerned for our members and we are here to help.

To better understand the issues around EPIC and our clerical group we ask for your help in filling out this short survey.

CUPE Local 4000 and The Ottawa Hospital recently resorted to interest arbitration to completely resolve all issues related to a renewal collective agreement. This is a normal requirement under the Hospital Labour Disputes Arbitration Act, and necessary for this round of bargaining due to impending government legislation.

The Award for a renewed Collective Agreement was issued on May 24, 2019, applying the submissions of the parties and the statutory criteria the Arbitrator is required to consider under the Act, and well as the principles of replication (with Central), comparability, total compensation and demonstrated need.

The full award can be viewed at AWARD LINK. Additionally, the Local will be attempting to book auditorium space at each campus during the week of June 3-7 to respond to any questions members may have. The award will also be on the agenda at the upcoming membership meeting on June 11, 2019 (730 PM).

In summary, the award includes the following;

General wage increases as per the OCHU/OHA Central award

While these wage increases are lower than what we would expect for our members, they are consistent with CUPE Hospital awards in the Province, and certainly better than what we could expect after rumoured wage restraint legislation is introduced.

Changes to (all consistent with OCHU/OHA Central award):

Services of a Registered Massage Therapist will be covered up to a maximum of $375.00 annually using a co-pay model of 20% employee paid, 80% employer paid per visit with customary and reasonable caps as per the industry standard. No referral from a physician is required.

During bargaining, it was discovered over 30+ department schedules, affecting over 400 employees,  existed that conflicted with the provisions of the collective agreement. The parties had to address those schedules, as well as implement a process to address introducing extended tours in the future.

New effective dates for submitting vacation requests (twice per year), as well as a provision that employees are to submit vacation time as per the Ontario Employment Standards Act.

The increases to the specific classifications were applied in accordance with the legislated criteria.

Greetings,
On behalf of the Bargaining Committee, I am relieved to announce that the parties have agreed to resolve all remaining outstanding issues in order to achieve a renewed collective agreement.
There are some remaining details to be finalized, but we are confident they will be in place before any further attacks on free collective bargaining are introduced by the Ford Government, including rumoured wage restraints.
Thank you for all your support over this long process. Please understand that no specifics can be discussed until all the paperwork is complete. We will send out details of the renewal collective agreement as soon as we are able.

75% of Ontarians think the Conservatives are going down the ‘wrong path’: poll

On April 30th, Members from our local boarded buses to Toronto joining 10000 others at a rally at

Queen’s Park, to launch a major campaign organized by the Ontario Health Coalition

to protect our public health care system from Ford’s cuts and privatization agenda.

CUPE Local 4000 met on two occasions with the Ottawa Hospital in collective bargaining, both times with the assistance of a Mediator. There was a third date scheduled, however the hospital cancelled that date due to “other priorities”.

Bargaining ended May 9th with the Union tabling a comprehensive package in response to all outstanding issues, as well as an alternative position for the Hospital’s consideration. We expect to hear back from them in the next 7-10 days, and will update the membership as soon as we have an opportunity to review the Employer’s response.

Please watch for updates in the coming days, including at the General Membership meeting on Tuesday May 14 at 730 PM. The floor will be open for suggestions on any potential actions the membership wishes to discuss in order to support the Bargaining Committee in reaching a collective agreement that respectfully reflects our members and the work of our membership.

Tomorrow at 6 AM, a full bus of members from CUPE 4000 will travel to Toronto to join more than 10000 other activists to demand an end to more cuts and privatization threatened by the Doug Ford government. Here’s why… 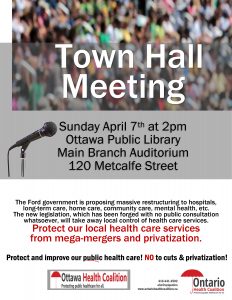 The Ottawa Hospital is moving quickly to close the in-house cafeteria kitchen at the Riverside Campus that serves patients, their families and staff these “home-style” meals and replace it with an outsourced take out food company. Please take a minute to sign the online petition that asks the Ottawa Hospital to keep the Riverside Cafeteria open and to stop the contract the hospital is planning to sign with a fast food chain.

Replacing home-cooked meals with fast food is a bad idea.

When a hospital does it, it’s really a bad idea.

Many of the more than 300 patients each day who receive care and support from the kidney, dialysis and other clinics at the Ottawa Hospital’s Riverside Campus get vouchers for a home-style meal at the in-house cafeteria following their treatment. Patients’ family members often eat with them.

But the hospital is moving quickly to contract out the in-house kitchen to a fast-food chain. We feel the hospital should lead by example and not only continue to operate the in-house Riverside cafeteria, but make it better by serving even more wholesome, nutritious meals.

If you agree with us and want to keep the Riverside cafeteria cooking, please take the time to sign our petition.

Government documents leaked to the opposition NDP show that the
Doug Ford PCs are planning unprecedented changes to our health care
system that would cut, merge, privatize and restructure all aspects of
patient care and delivery.
Many public health care experts and advocates agree that what the PCs
are proposing, and the speed that they intend to carry all this out, will
cause great upheaval and pose risks to patients, as care is realigned,
cut or privatized.